This question comes up a lot.

Mostly people will ask about some theme from ThemeForest. I’ll usually call a spade a spade, so will tell them what I think. Then comes the inevitable “What’s wrong with ThemeForest?”

Ok, first up… not ALL themes on TF are bad. But the percentage of bad ones is high enough that it just isn’t worth the hassle searching through them and taking the risk. It’s a legit gamble when you pick a theme, because you just don’t know enough before the purchase. 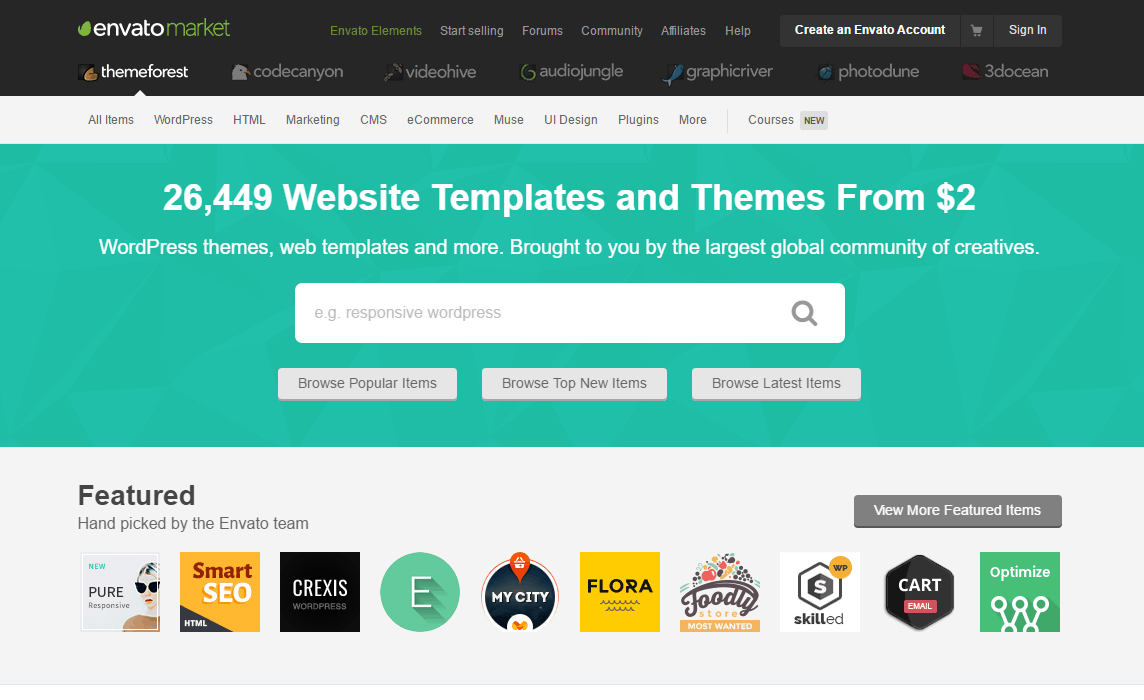 “But what about the star ratings?” I hear you say.

I once loved the star rating system, but plenty of problematic themes have near perfect ratings. The only way I can explain this is that most of the problems show up after a few months. Probably after the ratings were given.Or maybe the votes are coming from end users who haven’t yet noticed their load speeds or that some of the changes they made by themselves are totally broken on mobile.

In our years doing this, we’ve built a lot of websites and used a lot of themes, especially when the client’s budget is lower. I can count the number of times a ThemeForest theme hasn’t been a problem on one hand.

Actually, on one finger.

I Once Loved ThemeForest

Like (probably) most web designers, I started out my journey thinking “Wow, there’s something here for everyone. I’ll just be able to pick one that is close and modify it!”.

We built a few sites and things were going great… for a while.

The problems almost always show themselves 6 months or more down the track.

Sometimes you can immediately see that you’ve made a poor buying decision. You’ll install the theme, it’ll ask for 10 plugins to go along with it, 4 different sliders that you’ll never use and some terrible page builder*.

* Not a dig a page builders, just the ones on TF. More on this soon.

But other times everything will seem fine, until your whole site is broken an un-updatable.

You can’t look under the hood before purchase

If you were buying a car, one of the first things you would do is look under the hood. If the engine was all rusted out (or had 4 built in sliders) you would probably not buy it.

Unfortunately you can’t see anything about how the template is set up. There are a hundred different ways just to build a home page, and every theme seems to do it differently.

Do they build the homepage with widgets, sections (custom post type), a page builder or something else entirely?

Unless you want your site to look *exactly* like the demo, it can be a big issue.

You also can’t see how well (or poorly) the theme is built, which plugins it will force you to install or a host of other things which may spell trouble later.

I can’t remember the last template we used that wasn’t loaded with extra plugins that you will never use. Some templates will ask for several plugins that do the same thing in case you want to use one of them (looking at sliders, again).

One of the most popular themes

This is all great at giving you options…. And slowing down your site.

Plugins are also commonly the source of vulnerabilities which result in sites getting hacked. A while back, Revolution Slider had a serious vulnerability. Revolution was used in a huge amount of TF themes. If you didn’t own a license to Revolution you had to go buy one and manually update, assuming it all went to plan and didn’t break your site in the process.

This isn’t so much a problem with TF itself, but what happens after people buy the templates.

We have taken over several websites that started as TF themes, but needed to be modified to fit the client’s needs. As I’ve mentioned, unless you need your website to look exactly like the demo, then chances are you’ll need some hefty modifications.

Sometimes this means making changes that are incompatible with future versions of the theme or one of the plugins is requires.

In human speak, this means that there may come a time that you’ll try to update something on your site, and everything will break. One of the biggest killers with this is Visual Composer. So, let’s move on to….

Like I said, not all page builders are bad. But many on TF are.

A huge number of themes include Visual Composer by default. Mention these two words around most good developers and watch them squirm.

We’ve inherited several websites where Visual Composer wouldn’t even load any more due to some site errors. In fact, right now our site is one of them, and we don’t have the time to fix it. Using a theme with Visual Composer is still one of my biggest regrets.

Some templates will include their own page builder, made just for that theme. These usually come with their own set of limitations and problems.

It’s Not A Good Thing

On top of that, there will usually be a ton of extra code in the theme itself. This is a natural side effect of trying to be everything to everyone. AKA the “Multi Purpose Theme”.

If you try to do everything, you have to have the code there to do it. The result is most often a total mess. This unnecessary code reduces performance, speed and scalability. It’s also a maintenance headache, so getting things fixed later will cost you more.

Many templates will give you options to have Testimonials, Team Members, Clients, Slides, Events, This, That, and every kind of thing you could want to add to your site.

These all get added to the left hand sidebar of your WordPress dashboard as another menu item. It makes things incredibly hard to find for you, and for your developer.

Even as a WordPress veteran, I’ll spend way too long looking through 100 menus for one simple setting that is in a weird place. On a website that only has a few pages. It makes no sense.

Most of the time these menu items won’t even get used. Not only is there a bunch more unnecessary code on your site, but it’ll make it harder for you to find the things you do want.

This ties into everything we’ve already spoken about. But it extends to more than just the above.

I can almost guarantee that 6 months from now you will want a new widget, or a new thingy on one of the pages of your site.

Sometimes, TF themes make something that should be so simple so damn complex. That’s usually because of one of the above reasons. Complex means more expensive.

This one comes last because it’s only happened to us once. Sometimes templates get pulled from the marketplace. If that happens, it means you will get no more updates and support. You’re on your own.

So what should you do?

After building loads of sites and inheriting poorly built websites over the years, this is an issue I feel pretty strongly about.

But to tell you the truth, ThemeForest is not really the problem. It’s just a marketplace.

So from here I’ll assume you’re going to take my word for it.

If you are engaging a professional to build your website, ask them kindly not to use ThemeForest.

If budget is tight and you are doing it yourself… (I am going to cop some flak for this)… use SquareSpace.

Seriously. Unless you plan on learning all about WordPress and becoming a developer, you will give yourself 100x less of a headache building something quickly in SquareSpace. You are starting a new business and have way more important things to spend your time on.

Then when you do have the budget, come back and talk to a developer to build you something awesome that continues to work for years.

2 thoughts on “8 reasons we almost never use ThemeForest Themes”